St. Paul – Quite the Livable City!

Posted at 08:33h in MNRealEstate, Relocating to Minnesota by sarahanderberg 0 Comments
0 Likes
Share

St. Paul lies along the east bank of the Mississippi River and is built on numerous bluffs, offering picturesque views from many places along the river. Despite our long and cold winters, Minnesota’s residents are a hearty group; our warm summers make for excellent outdoor activities, like hiking along the banks of the Mississippi, canoeing, and bike riding. 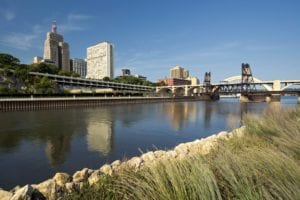 Before Minnesota was admitted to the Union in 1858, it was a territory that strategically utilized its central location on the Mississippi River for fur trading. St. Paul was known as Pig’s Eye Landing until 1841, when a Roman Catholic missionary, Lucien Galtier, built a log chapel dedicated to the apostle Paul. Galtier made it known that the settlement was now to be called St. Paul.

Native Americans originally inhabited the area: From the early 17th century until the mid 18th century, a tribe of the Sioux, Mdewakanton Dakota, lived near the mounds by Dayton’s Bluff after fleeing Mille Lacs from the Ojibwe. The Mdewakanton Dakota called modern-day St. Paul “I-mni-za ska dan” which means “little white rock” due to its exposed white sandstone cliffs.

Between the early 1920s and 1930s, St. Paul had become a safe haven for gangsters, bank robbers, and bootleggers who were on the run from the FBI and could continue to run their operations – which earned its reputation as the “sanctuary for criminals” in the Midwest. John Dillinger, Barker-Karpis gang, Clyde Barrow and Bonnie Parker, are just a few famous gangsters that stayed in St. Paul at some point. Because of this large concentration of criminal activity and organized crime, reformers called for a cleanup of the city in the mid-1930s.

Today, St. Paul is the second most populous city next to Minneapolis. With over 322,000 residents, it is a city of neighborhoods. Home to Fortune 500 company headquarters, countless firms and small businesses, St. Paul is a thriving commercial center. Popular neighborhoods to live are: Cathedral Hill, Highland Park, Macalester-Groveland, St. Anthony Park, Summit Hill, West 7th-Fort Road, and Lowertown (in downtown).

Features of the capital include Summit Avenue: An impressive span of Golden Age mansions, including the well-revered James J. Hill House. The Cathedral of St. Paul, which offers stunning views overlooking the downtown area, is of the Classical Renaissance-style and is modeled after St. Peter’s Basilica in the Vatican City. The construction of the Cathedral began in 1906, with the first services held in 1915, although the interior was not fully completed for another thirty years.

Como Park Zoo and Conservatory is also a popular attraction that was built in 1915 and is home to a variety of animals. The Science Museum of Minnesota is another famous landmark, with incredible global exhibits that make a stop in St. Paul. Don’t forget about the famous Grand Avenue: A bustling upscale shopping district chock full of small businesses and wonderful restaurants, like Cafe Latte and Salut Bar Americain.

So, thinking of making the move to St. Paul? Call Jeff Anderson and the Anderson Team at 612-386-8600 and he can help you navigate your purchase in the “most livable city!”