Saint Paul vs Minneapolis: What are the Differences?

01 Feb Saint Paul vs Minneapolis: What are the Differences?

Posted at 09:38h in MNRealEstate, Relocating to Minnesota by sarahanderberg 0 Comments
0 Likes
Share

Minneapolis and Saint Paul, known affectionately as the Twin Cities (or more commonly, the Cities, to the natives) are both amazing cities in and of their own. So, what are the differences between these two? The Mississippi River surely isn’t the only thing that separates these two! 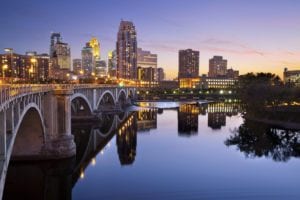 Saint Paul is the older, more established sister, where restaurants close earlier than Minneapolis, because she likes to go to bed at a reasonable time. A classy and timeless beauty. Minneapolis, on the other hand, is the younger, more rambunctious sister, where you can find cheese curds and nachos at 1:00 am should that be your fancy. She’s young, trendy, and hip. The great thing about both is it’s a short drive between the city centers, around ten minutes or so depending on traffic, or about thirty minutes if you prefer to take the light rail. While the ease of public transportation is much more available in Minneapolis, with the new sports and concert venues that have opened in Saint Paul, it’s becoming a little easier to get around here.

Saint Paul is more like East Coast cities and is known for having one of the longest, most preserved stretch of Edwardian and Victorian homes along Summit Avenue and you can find brick roads in a lot of the older neighborhoods, like Crocus Hill, Cathedral Hill, and Macalester-Groveland. It’s generally regarded as being a quite lovable place to live, however, the streets here make just about no sense due to zero logic and the inside joke is that they were “laid out by drunk Irishmen.” Of course, there are no known facts to support this theory. Saint Paul is a big small city: The population here is just over 306,000, according to the latest data from the U.S. Census Bureau.

Known for its vibrant nights and fun-filled days in Uptown, there is absolutely no shortage of fantastic restaurants where you can find brunch even on weekdays. You can’t forget the chain of lakes: Lake of the Isles, Bde Maka Ska (formerly known as Lake Calhoun), and Lake Harriet, where you can sail, canoe, fish, and more. All boast a rich shoreline of impressive mansions that are rather awe-inspiring. Downtown has a skyway system that connects to all of the buildings – perfect for our insanely brutal winters – and the streets make a perfect grid so it’s very easy to navigate. Minneapolis is a small big city: The population is over 422,000 and counting.

Mark Twain allegedly said, “Saint Paul is the last great city of the East, and Minneapolis is the first great city of the West.” So, whether you are a Minneapolis person or you’re a Saint Paul person, in either city you have full access to incredible theaters, museums, exquisite dining, and great concert and sport venues. Oh, and you can’t forget shopping: The Twin Cities is also home to the famous Mall of America!

Thinking of making the move to the Twin Cities? Contact Jeff Anderson and The Anderson Team at 612-386-8600 and he can help navigate your purchase and loan!