Minneapolis – The Largest City in Minnesota!

Posted at 09:21h in MNRealEstate, Relocating to Minnesota by sarahanderberg 0 Comments
0 Likes
Share

Minneapolis is the largest city by population in Minnesota, and is nestled on and around the Mississippi River. With a thriving downtown and uptown area, there is no shortage of theaters, upscale restaurants, sporting arenas, and nightlife. Public transportation is highly available in Minneapolis, making it easy to go from one area to another. 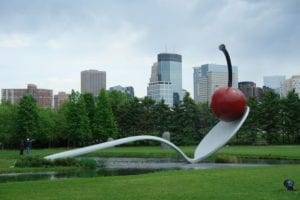 The early inhabitants of Minneapolis were Sioux and Ojibwe. The city gets its name from the Sioux word “minne” which means “water,” and the Greek word “polis,” meaning “city.” Much of Minnesota was explored by French explorers and Catholic missionaries in the 1680s, and French explorer, Daniel Greysolon, was on a mission to extend French dominance over the area present-day Minnesota sits when he learned of other explorers being held captive as he was exploring the St. Croix River area. Greysolon arranged for the release of these prisoners: Michel Aco and Antoine Auguelle, French explorers, and Father Louis Hennepin, a Catholic priest and missionary.

Originally, Minneapolis focused on sawmills but flour mills soon became the main industry, as this industrial development started the Minneapolis Grain Exchange. Through new innovations in milling techniques, the city became the world-leading hub of flour production, earning the name “Mill City.” The first hydroelectric power plant in the United States was built at the falls on Upton Island – turning on the lights on September 5, 1882, Minneapolis beat the Vulcan Street Plant in Appleton, Wisconsin, and became the first city to start generating electricity via water.

Minneapolis is the United States’ most literate city, and is a central location for the Twin Cities’ artists and creatives. With an abundantly rich arts and theater presence, many actors, writers, musicians, and poets take up residence in Minneapolis. Minnesota has more live theaters per person, second only to New York City! It is also home to the Walker Art Center, known as “The Walker” to locals, which offers stunning art galleries and the outdoor Minneapolis Sculpture Garden, which houses the famous Spoonbridge and Cherry sculpture.

The park system in Minneapolis has been called the best-designed, best-maintained, and best-financed in the whole of the United States. As impressive as that is, the city’s Chain of Lakes, which consists of seven lakes and Minnehaha Creek, is inter-connected by walking, running, and biking paths, as well as being able to canoe or boat from one lake to the next. Fishing, swimming, and picnicking are popular outdoor activities on the lakes during the summertime, especially at Lake Bde Maka Ska (formerly known as Lake Calhoun) and Lake Harriet.

Is Minneapolis calling you home? Make the move by calling Jeff Anderson and The Anderson Team at 612-386-8600 and he can help you navigate your purchase!